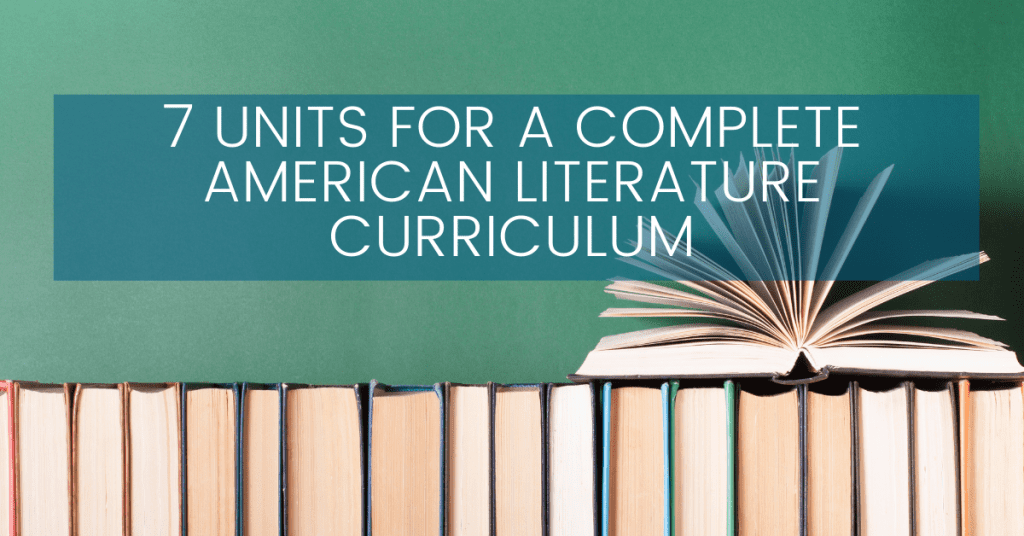 New to American lit and looking for an American Literature Curriculum Map? I’m here to help 🙂

In my 11 years of teaching, I’ve taught everything from 4th to 12th grade. Hands down, my favorite grade to teach is 11th. They’re old enough to realize they should start taking school seriously, but senioritis hasn’t kicked in yet.

English III is my teaching sweet spot. In North Carolina (where most of my experience has been) that means American Literature.

This is perfectly fine because that’s one of my favorites to read –  especially the darker authors like Poe and  Hawthorne. (I have a little bit of a dark side, but you never guess looking at pale, green-eyed, blonde-haired 5’3 me).

Being the only person that teaches a specific group of students (in this case, the only resource English teacher within the special education department) has its benefits. For example, I was kind of part of the English department but not really, meaning I didn’t necessarily have to adhere to the scope and sequence/pacing guides and things like that that the regular ed teachers had to. As a result, I was able to structure my class how I best saw fit.  Keep reading to discover how I structured my semesters.

I always started off with the first unit in the textbooks, which in the school usually consisted of Native American origin/creation stories as well as early journals. I’d usually break this up into two units – one for the creation stories and one for the nonfiction journal pieces.

This is typically the shortest – maybe a week (based on 85ish minutes 5 times a week).

We’d start with “The Earth on Turtle’s Back” by the Onondaga tribe and then move into “When Grizzlies Walked Upright” by the Modoc tribe.

After reading, students compared and contrasted the two stories. One year, I had them make a foldable featuring the title, an illustration, summary, and … comprehension questions? Theme? I don’t quite recall (and of course, that’s one thing I have thrown away 🤦🏻‍♀️) but you get the idea.

Both stories serve as great mentor texts for students to use when writing their own origin stories.

A continuation of the textbook Unit 1, my Unit 2 consisted of writings from Columbus, John Smith, and William Bradford – not exactly the most enticing interesting things in the world.

Reasons to start with these texts:

I found that going ahead and getting that out of the way tended to work better for me. I was able to kind of frame it as a “Hang with me and I promise I’ll get to some more interesting stuff later on” unit.

I’d usually end this unit with some information on the Puritans, some Ann Bradstreet poetry. And of course – Jonathan Edwards’ Sinners in the Hands of an Angry God. Read as completely deadpan as possible to get the full effect.

I always found it helpful to provide students with some background information on the time period. Visual notes are a great way to engage students in the otherwise drudgery of notetaking. 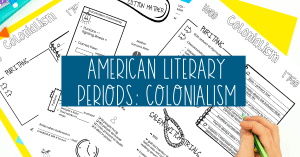 Keeping in chronological order – the next up is “foundational” US Documents. The textbook only included the Declaration, but you can expand it to be whatever seminal documents you choose. The Constitution.  The Emancipation Proclamation. The Gettysburg Address. Frederick Douglass “What to the Slave is the Fourth of July?” Martin Luther King’s “I Have a Dream” speech.

Here is a great place to build in some mini-lessons on rhetorical devices – especially if you’re covering Douglass or King. Check out this post on 4 Ways to Analyze Rhetorical Devices in MLK’s “I Have a Dream”. Have students track the use of rhetorical devices through charts, rhetorical pyramids, and/or a rhetorical precis. 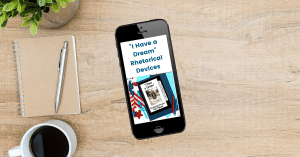 Unit four was where I typically started to stray from the chronological layout of the textbook. The classes I taught were on a 4 x 4 block schedule meaning that I had for classes in the fall and then another four in the spring. Each class was 90 minutes long.

I often referred to this as my Gothicism unit, and it was my favorite unit to teach. I love Poe, Hawthorne, Irving – all those guys. I’d typically start with Poe since he would be one of our main focuses. Before that, though, I’d do a brief introduction on Gothic literature and how it was a response to the Romanticism of the time. 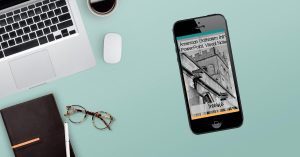 Most of my students had already read “The Tell-Tale Heart” and “Cask of Amontillado”, so I ventured into some lesser-known works. My go-to was “The Black Cat”.  I’m also a fan of “The Fall of the House of Usher”; although it’s a bit longer and the vocabulary and syntax are more complicated, it’s an excellent example of Gothic writing.

Other favorites of mine included Hawthorne’s “The Minister’s Black Veil” and “Young Goodman Brown” – great for discussing allegory.

The last couple of years when I was teaching strictly special ed students I stuck with Of Mice and Men because it was short and accessible and students could relate to it. We had great conversations about the treatment of Curley’s wife,  George’s justification for shooting Lenny, and so forth.

In previous classes, I have taught The Great Gatsby, which is absolutely one of my favorites and includes one of my favorite endings in all of English literature: “So we beat on, boats against the current, borne back ceaselessly into the past”. However, I felt that it was probably not the best choice for my special ed students. I always started with introductory material on Fitzgerald and the 1920s; I’m a firm believer in providing historical context for the texts I teach (I often say, only half-jokingly, that I know enough history to provide this context, but don’t ask me much else). 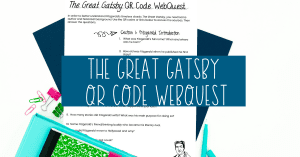 Another one of my favorite American literature pieces is Their Eyes Were Watching God.  I may be a bit biased as I live in Florida and part of it does take place in the town that my parents live in. I have unfortunately never had a chance to actually teach this but it is definitely on my list of things should I ever get to teach American Lit again.

In my cotaught regular education classes, we always did The Crucible. I’ve done this as one of my last units and as part of a kind of modernism time. Start off with background on McCarthyism and Miller’s views on it. This text can also be taught earlier on in the year when you cover Puritan literature.

One of my favorite memories was when my cooperating teacher left mid-semester and I was left to teach the class. I had several boys literally fighting over who was going to get to read Reverend Hale. The Crucible will always hold a special place in my heart for that reason alone.

My last unit was always my contemporary short stories –  so authors such as Hemingway and Twain. Novels such as Gatsby could also be put into this category if you’re going more chronologically, as could The Crucible. My go-to Hemingway story was “Hills Like White Elephants” – great for inference practice. A Rose for Emily also works well here.

I also tended to pepper in a mini poetry unit focusing largely on American poets such as Langston Hughes and comparing and contrasting some of his poems to other poems and songs that had the same theme. Check out 18 Poetry Pairings for Secondary Students for poetry pairing ideas.

The last few weeks were always tied up with test prep then came the NCFE, which was North Carolina’s 11th-grade state standardized test. Then,  it was time to start the whole thing over two days later (if I taught 11th grade both semesters).

Looking to supplement your American literature curriculum? Check out my American Literature Bundle: 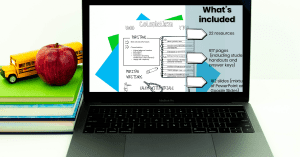 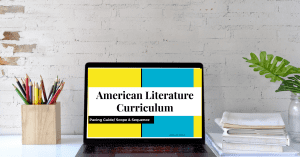